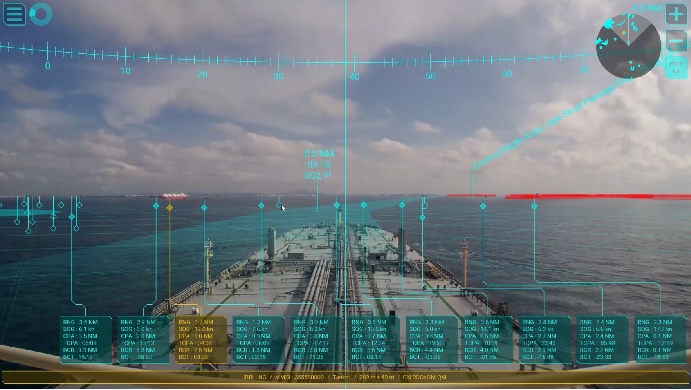 The system displays information on other vessels sailing on a vessel’s planned route and surrounding sea areas and other ocean conditions, such as shallow waters, on tablets and screens. It integrates information from the Automatic Identification System (AIS) and radar with real-time video images from the bridge camera in collaboration with Furuno Electric’s cutting-edge Electric Chart Display and Information System (ECDIS) FMD3300 series. The system provides visual support to crewmembers during their watch-keeping and ship operations by using AR technology to superimposing real-time video imagery and voyage information.

The system has been installed on the 1st MOL’s next-generation FLEXIE Series car carrier, Beluga Ace (Note 1), which was delivered in March 2018, and VLCC Suzukasan, delivered in October 2018 for the demonstration test. MOL has continued to refine the AR display screen and verify the system’s effectiveness. In officially commercializing the system under the Furuno Electric brand, it will be installed on MOL’s VLCC fleet, a vessel type that requires the highest level of operating safety, with the goal of achieving an even greater margin of safety. Due to its deep draft, VLCC operations require special care when navigating on the waters such as the Straits of Singapore and Malacca, a heavily trafficked sea lane that has limited areas. The project partners developed the system to support crewmembers, alerting them to other vessels they need to watch, the location of shallow waters, and so on, by displaying integrated real-time video images with information from nautical instruments on screens on the bridge even in congested sea lanes. The system will further enhance MOL’s marine technical skills, moving the company toward its objective of becoming “the world leader in safe operation.” (Note 2)

MOL will sequentially install the system in its energy transport fleet including LNG carriers, as well as its dry bulkers to provide seafarers with greater support in watch-keeping and ship operation during voyages, and continue to refine and enhance its effectiveness. In addition, MOL expects this technology to play a key role in realizing autonomous ships in the future.

MOL has moved ahead with advanced support of safe operation and reduction of its environmental impact, as set out in the “ISHIN NEXT – MOL SMART SHIP PROJECT -,” which began in November 2016, and aims to become customers’ first choice as a logistics partner by applying ICT technology to improve service quality and efficiency.

MOL and Karpowership announce the first LNG-to-Powership Project under the Co-Brand “KARMOL” to be delivered in Nacala, Mozambique