Every three years CIMAC holds a major international congress and exhibition in one of its member countries. This is a unique opportunity for us all to keep up to date with what is happening in our internal combustion engine industry and to discuss with other specialists those topics which interest us most. Members are encouraged to attend at reduced fees. 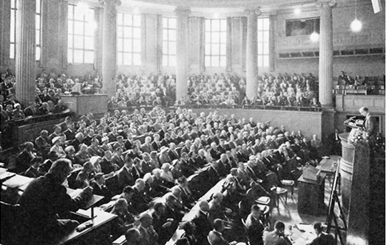 Paul C. Tharlet encouraged from no fewer than nine other countries to take part, namely from Belgium, Denmark, Germany, Great Britain, Italy, Spain, Sweden, Switzerland, and The Netherlands. The was founded in June 1950 and named “Congrès International des Moteurs à Combustion Interne”. The term “Interne” was dropped from this name six years later at the Zurich , where gas turbines were included among the topics.

The first congress in the history of CIMAC was by “Le Syndicat des Constructeurs de Moteurs à Combustion Interne” under its president Paul C. Tharlet, who subsequently became the CIMAC President. 89 papers in all were accepted for the by the technical  headed by Jean Messiez-Poche, who went on to serve for 23 years on the Permanent Committee of CIMAC. This first CIMAC Congress was rated a remarkable success and attracted no fewer than 505 delegates from 15 countries. 87 “accompanying persons” were taken good care of by the “Comité des Dames”. A balanced of technical works visits and social events lasting nearly two weeks duly impressed the participants, who were generous with their praise. The general feeling was clear; there was everything to be gained by holding another congress in the future.

The CIMAC Webinar series off to a great start! After successfully completing three webinars on the 'Global Sulphur Cap 2020' on March 5, March 19 and April 29, 2020, we thank all the participants for being a part and making it a success. A special thanks to our...

CIMAC has released details of the 29th CIMAC World Congress, which takes place in Vancouver, Canada from 10 to 14 June 2019. As the most important platform for information exchange and personal contact between stakeholders in the large engine sector, the Congress will...