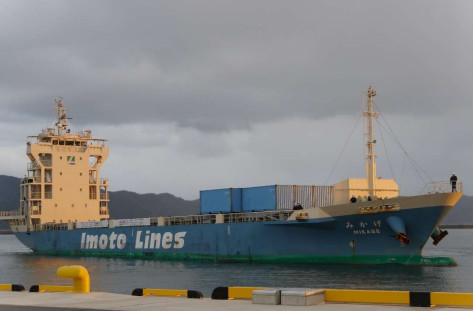 The following two points are major features of the consortium’s role in the MEGURI2040 unmanned ship operation projects:
(1) The consortium conducted the sea trial with two different type of ships: a coastal containership and a coastal car ferry, aimed at using the results to develop versatile technologies by identifying similarities and differences between the two ship types.
(2) It conducted mooring tests using a drone in a move toward automated mooring operation.

(Consortium members and its main roles) 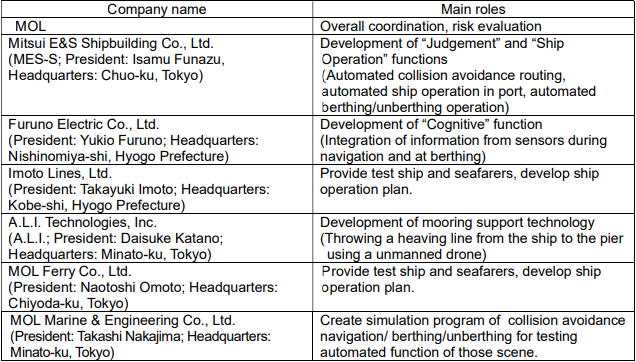 Information on other ships and obstacles/debris on the set route was gathered by the Furuno Electric-developed autonomous surrounding information integration system (measures and displays positions, speed, types of nearby ships, and position of obstacles/debris by integrating information gained by cognition through radar, AIS, and camera images). Based on the integrated information, the ship navigated the safe route formulated by the autonomous collision avoidance routing system. 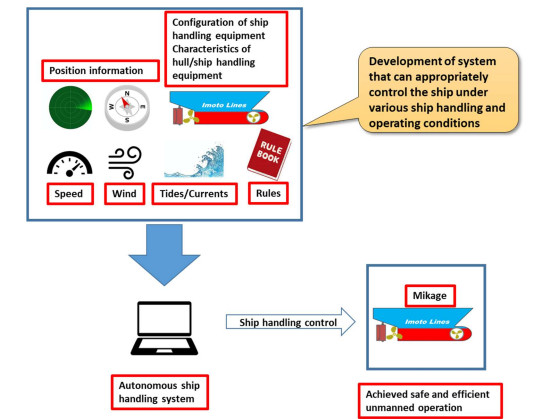 Autonomous berthing and unberthing require especially delicate handling, so the ship berthed and unberthed using information from the Furuno Electric-developed berthing/unberthing support sensor (equipment that calculates and visually displays accurate relative distances and relative angles between the pier and hull from information gathered by LiDAR/camera/satellite compass).

“Automated mooring” is an element of the consortium’s project. Normally, a crewmember on the ship passes the heaving line (to moor the ship in port) by throwing it to a worker on the pier. In this sea trial, the A.L.I.-developed automatic flight drone carried the line to the pier. As technology advances in the future, this is expected to become an alternative approach to mooring operations, which is a heavy burden on seafarers. 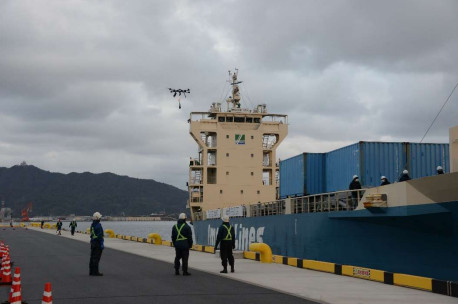 In order to develop highly versatile technologies, the consortium plans a sea trial of autonomous navigation using the coastal car ferry “Sunflower Shiretoko,”  which has different characteristics from the coastal containership.

The consortium continually aims to reduce the workload on seafarers and ensure safe, secure marine traffic, through MEGURI2040 initiatives to realize autonomous sailing.