The “Ship Carbon Recycling Working Group(WG)” of Japan’s Carbon Capture & Reuse (CCR) Study Group has confirmed that carbon recycled methane produced by methanation technology (Note 1) can be recognized as zero emission ship fuel. A technical paper describing the details of the calculation procedure and evaluation conducted by the WG has been published in the latest issue of the journal of Japan Institute of Marine Engineering.

Carbon recycling, which is the process of capturing and reusing emitted CO2, is becoming increasingly important as one of the pathways to realize a carbon-neutral society.

To explore the feasibility of the concept of utilizing methanation technology for zero-emission ship fuels (Note2), the WG was formed within Japan’s CCR Study Group, and started its activity in July 2020.

Since it is a basic premise for the WG’s activity that carbon recycled methane can be recognized as zero-emission fuel, the WG firstly worked on the evaluation of its potential.

While International Maritime Organization (IMO) has yet to develop the rules for calculating emissions from the onboard fuel combustion of carbon recycled methane (Tank to Propeller), the importance to be cognizant of  CO2 emissions in the fuel supply process(Well to Tank) has been noted.

The WG has assumed and evaluated (Note 4) the following four processes as the supply chain for carbon-recycled methane fuel: (1) CO2 separation and capture, (2) CO2 transportation, (3) methanation fuel synthesis, and (4) methanation fuel liquefaction. As a result, the CO2 emission per unit calorific value of carbon-recycled methane fuel by methanation was calculated as approximately 27-gCO2/MJ (regarded as Well to Propeller).

This figure is comparable to other alternative fuel candidates generally recognized as zero-emission fuels, confirming that carbon-recycled methane can be recognized as zero emission ship fuel. In addition, further reduction to approximately 20-gCO2/MJ is expected by improving the efficiency of the separation and capture technology, and using electricity produced from renewable energy.

A technical paper describing the details of the calculation procedures and evaluation involved in this study was published in the journal of Institute of Japan Marine Engineering, Vol. 56, No. 4.

In order to verify the feasibility of carbon recycled methane as a ship fuel, the WG will continue to work on issues such as CO2 transportation by large-scale liquified CO2  carrier vessels, supply of hydrogen from renewable energy, prevention of methane slip (Note 5), supply infrastructure of liquefied methanation fuel, and economic viability.

Mitsui O.S.K. Lines, Ltd. has set a medium- to long-term target to achieve net zero emissions by 2050 in the “MOL Group Environmental Vision 2.1”, and has implemented five initiatives to achieve this goal. The WG’s confirmation that carbon recycled methane can be recognized as zero-emission ship fuel will contribute to the further promotion of the “adoption of clean alternative fuels” and the “expanding low-carbon and decarbonization projects through use of the MOL Group’s concentrated strengths” and will continue to work together with industry leaders to reduce GHG emissions. 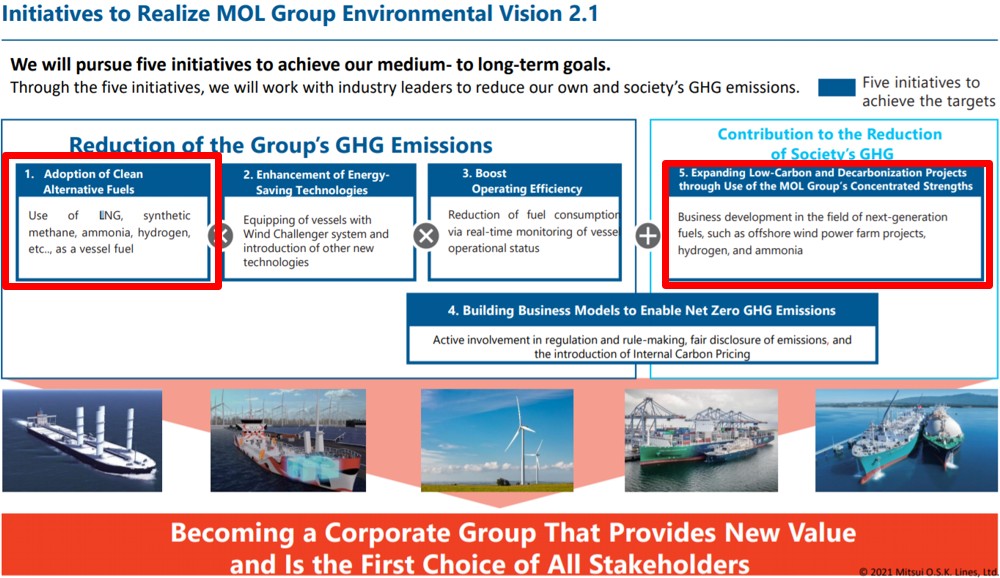 (Note 1) Methanation is a technology for synthesizing methane, the main component in natural gas, by causing a chemical reaction between hydrogen and CO2 in a reactor vessel filled with a catalyst. It uses emitted CO2 separated and captured from industrial facilities. As the CO2 generated when combusting synthesized methane is considered to be offset by the separated and captured CO2, it is expected that CO2 emissions can be significantly reduced by using hydrogen generated by electrolyzing water with electricity derived from renewable energy.

(Note 2) IMO considering measures to reduce GHG emissions in international shipping, adopted the IMO GHG initial  strategy in April 2018, aiming to improve carbon intensity of the sector by at least 40% by 2030 and reduce annual GHG emissions by at least 50% in 2050, both compared to 2008 levels, and eventually phase out GHG emissions as early as possible within the century. Carbon recycled methane by methanation has gathered attention as a highly expected technology for the realization of GHG zero emission.

(Note 3) The CCR Study Group was established with the objectives of proposing effective carbon neutral measures to reduce the use of fossil fuels by offering alternative energies such as synthetic methane, which is generated by combining CO2 generated by industries with renewable energy-derived hydrogen, and contributing to the establishment of a new energy supply system by 2050.

(Note 4) The assumed supply chain in the study spans multiple countries, the consideration may be necessary to which country emitted CO2, including ocean-going shipping transportation, should be allocated, but that has yet to be determined as no international framework or agreement has been formed.

(Note 5) Methane slip is the unburned and exhausted methane from the main engine. Methane is GHG with 25 times greenhouse effect of CO2 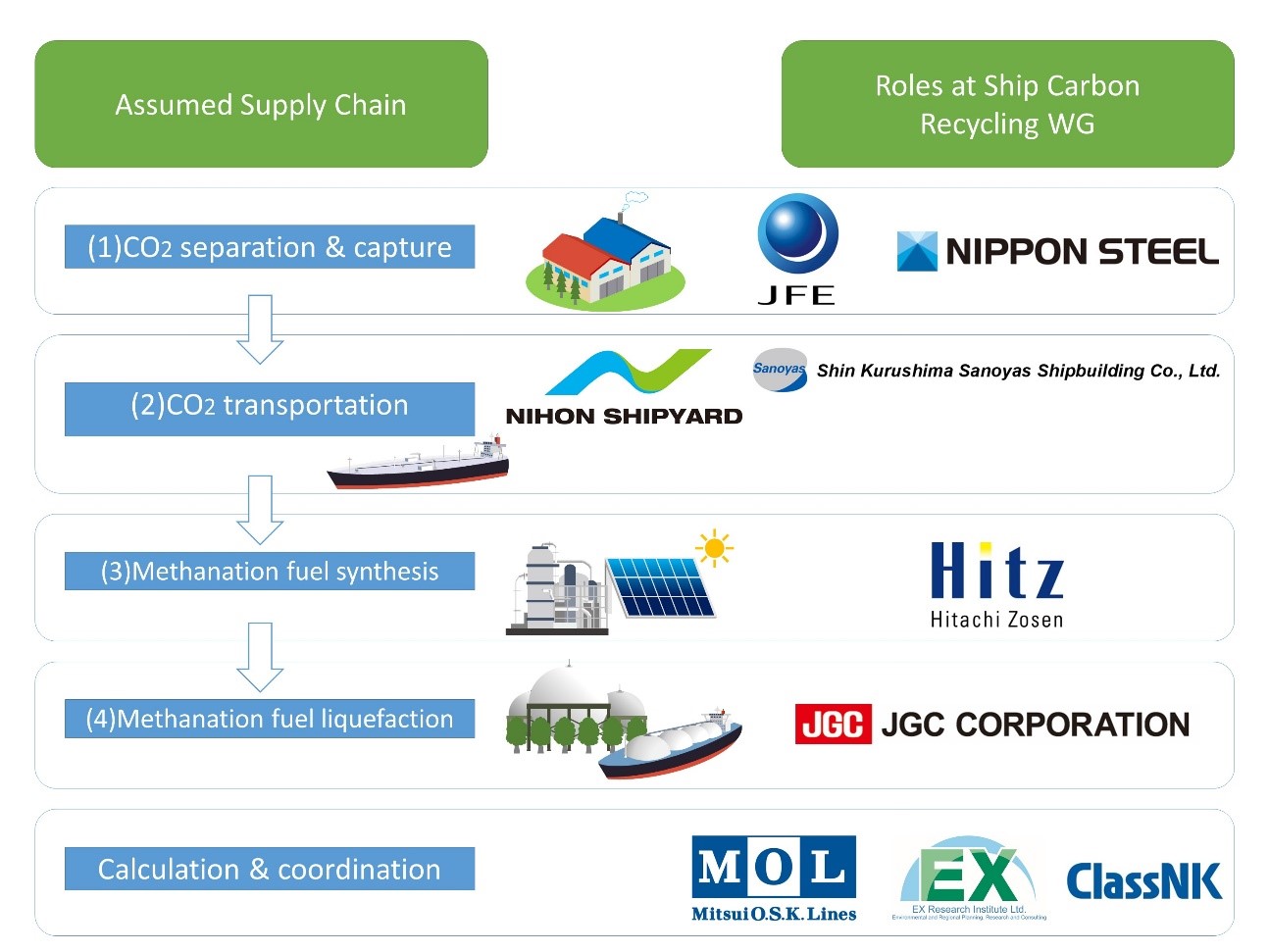 Notice of Agreement to the Integration of Container Shipping Businesses