Mitsui O.S.K. Lines, today announced that six MOL-operated/managed vessels have received commendations from the commanders of the 3rd and 4th Regional Coast Guard Headquarters of the Japan Coast Guard (JCG).

To mark Japan Hydrography Day *1, the commanders of the Regional Coast Guard Headquarters presented testimonials to individuals and organizations that have contributed to marine information services (assisting with research related to the sea and marine information). This year, MOL’s vessels won praise for their significant contributions to the coast guard’s marine information services by providing observed data on seawater temperature and oceanic currents*2 over many years, and six of them were selected for special recognition.

Marine information provided by merchant vessels helps the JCG Hydrographic and Oceanographic Department, which collects marine information on ocean currents, tidal currents, and various other data, and in turn provides navigation-related information to vessels calling at ports in Japan.

PALAU REGISTERS AN INTEREST IN POSIDONIA 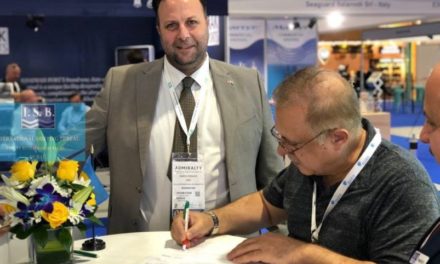 Palau marks its presence in Dubai